Before Covid our Soup Club lunch took place on the third Tuesday of each month in the church hall.  We had already planned for our March, St Patrick’s day meeting when the lockdown was announced, so rather than cancel we went ahead with making the Soup and Puddings packaged them up and delivered them to all those on our register.  It was so well received and appreciated that we decided to continue on a weekly basis.  Little did we know we would still be going and growing in December!

Most but not all of our Soup Club folk are older and a lot of them live alone.  During lockdown many of these people were shielding and so it was an opportunity to check that each person had a relative, friend or neighbour who would be able to shop for them and support them.  Initially the team took responsibility for phoning our older folk on a regular basis until we were happy that they were managing the situation and had support in place.

Seeing someone face to face, for a doorstep chat, was a real reassurance for many who were isolated and feeling cut off and lonely.  Getting a nice homemade soup and pudding is the added bonus!

We started with delivering to around 50 people, a good number of whom aren’t members of Bloomfield.  We now have around 78.  Some have dropped off the list as they are no longer isolating. Others have come on as elders or others became aware of people who would benefit.  We’ve even added folk who are neighbours of those on the list and have asked for them to be included.  Most people get a delivery every week, others just once a month by way of keeping in touch as they are happy with that arrangement.

While the majority are elderly people living alone, we also have families and younger adults who for a variety of reasons we wish to remind through our actions that we care for them in their difficult situations.

It’s not all about helping others!  The team gets a lot out of it too, getting to know some of our older neighbours and hearing their life stories is a real privilege.  There’s been many happy chats but some sad ones too; its difficult standing at someone’s doorstep while they cry and being unable to hug them or sit down with a cuppa.

Check out some great photos below: 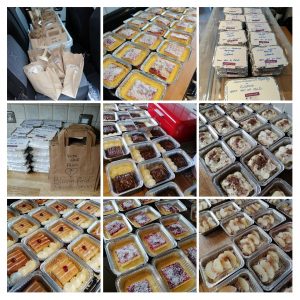 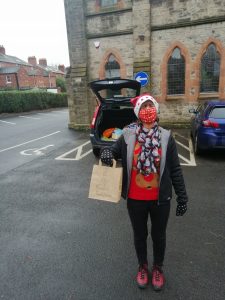 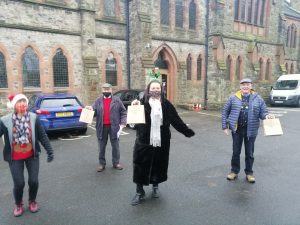 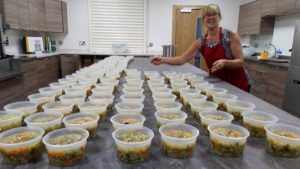